Well we didn't see Deacon or Rayna but we had a wonderful getaway to Nashville.  We decided a few weeks ago that we wanted to take a little weekend trip to celebrate our anniversary.  We didn't want to go far.  I'm almost embarassed to admit but we decided on Nashville while we were watching Nashville one Wednesday night.  I love the show and Patrick tolerates it.  We didn't really have any plans.  We really wanted to stay downtown but by the time we tried to book a hotel the only one we could find was $400/night.  So we stayed about 10 minutes from town and it worked out fine.

We dropped Barrett off on Thursday afternoon with Patrick's parents and they were so excited to keep him.  We got to Nashville around 8:00 and it was pouring rain.  We were going to try to go to the Bluebird cafe but it was so crowded when we got there people were lined up in the rain to get in.  We decided to go back to the hotel bar for a few drinks. 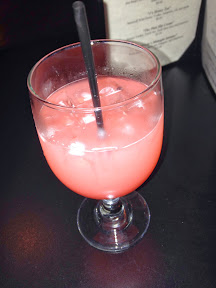 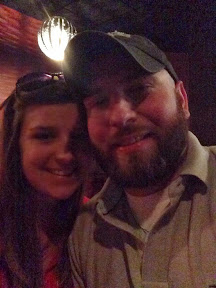 We enjoyed pizza, live music and watching this couple dance like they were on "Dancing with the Stars". 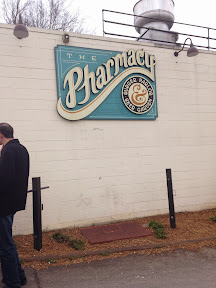 Friday, I had big plans for brunch at the Pancake Pantry but Patrick isn't a huge fan of waiting in line for food so when the line went down the block to get in we decided plan B would be "The Pharmacy".  Amy had recommended it and it was delicious.  People were lined up to get in this place too! 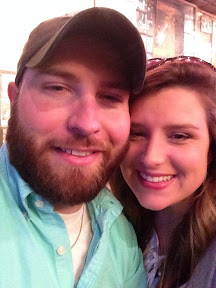 When we left there we were going to go to the Country Music Hall of Fame but we decided to just walk up and down Broadway and check out the bars.  We went to the "World Famous" Tootsies.  Yall, I was so surprised by how many people were out and about at 12:00 on a Friday afternoon.  There were three different bands playing in this one bar.  There were families with small kids everywhere.  I had no idea that Nashville was a hot Spring Break destination.
After we drank a few beers and listened to some music we headed back to the hotel to take a nap before dinner. 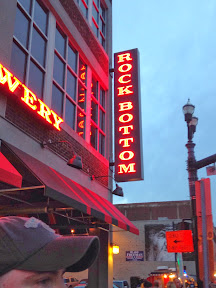 We weren't really sure where we wanted to eat dinner.  We decided to just eat where ever we could get a table.  Rock Bottom Brewery was the first place we went in and we waited about 10 minutes.  It was so good.  Patrick ate guacamole for the first time and didn't hate it.  We're making progress on him trying new things.  I had shrimp and lobster enchiladas and they were so good.  My margarita was only okay. 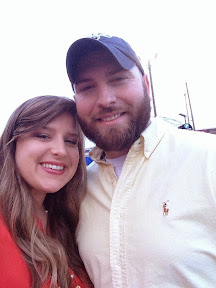 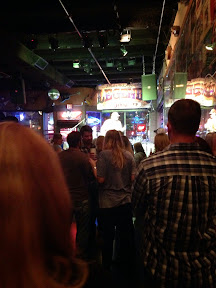 After dinner we walked up Broadway trying to decide if we wanted to fight the crowds in the bars to listen to live music.  We decided on Legends Corner and stayed there for a while 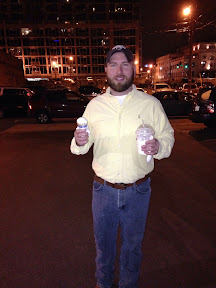 We left there and headed to the candy shop for a late night treat.  I got some candy and a chocolate/caramel covered apple while Patrick got ice cream.  I thought this picture of Patrick double fisting the ice cream was hilarious.
We took our treats back to the hotel and called it a night.
We planned to get lunch somewhere in Nashville before we headed home but it was raining and we were so ready to see Barrett we came straight home.
It was a fun couple of nights away but we missed Barrett way more than we thought we would.  I think it's important for our marriage to spend time away just the two of us and I'm sure it will get easier to leave Barrett.
A few things we learned this weekend.
-We are old.  We were in bed every night by 11.  There was a group of frat boys staying in our hotel.  I felt like I could fit in with them until the date on his shirt caught my eye. 2013.  That's 10 years after I started college and I died a little on the inside.  Also, they were heading out to get more rubber duckies.  Is this code for something that i don't know about?  If not what the heck were they doing with rubber ducks?
-A beer with lunch doesn't go down as smoothly as it used to.
-The quality of live music gets better the closer you get to downtown.
-We were told the most requested song in Nashville is "Wagon Wheel".  We conducted our own un-scientific survey and determined "Cruise" by Florida Georgia Line is actually the most played song.
-We need to upgrade to a king size bed.
-I can not travel with less than three bags.
-Nashville is apparently the Bachelorette Party capital of the South.
at 4:01 PM

Love this post! So glad y'all had fun. I have still never been to Nashville, even though no I apparently live just as close to there as I do to Bham. The "things we learned" cracked me up! I need to know the answer to the rubber duckies question!