Halloween with the PJ Masks

I started asking Barrett last month what he wanted to be for Halloween.  I got several different answers but when I started to get Gecko (from PJ Masks) more often than not I went ahead and bought the costume.  I couldn't decide what AveryAnn should be.  My first idea was a donut.  But when Jessica said Jackson was going to be Catboy, I knew AveryAnn had to be Owlette to complete the group.  She was the cutest thing ever.  They boys loved that she dressed up with them.  She wouldn't wear the mask though. 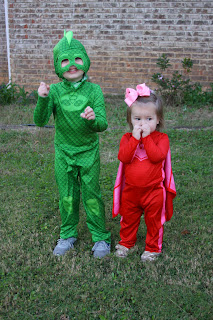 I managed to get a couple pictures of them with my real camera! 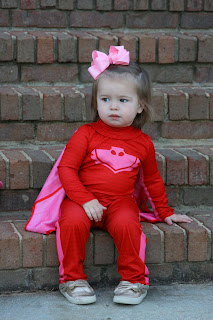 She was not sure about the whole event. 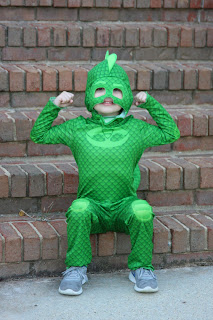 He was so excited!  He's been counting down the days until he could wear his costume. 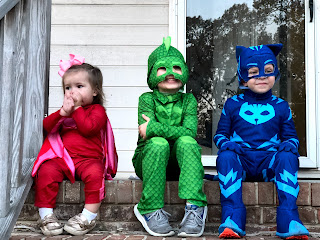 This is the best one I got of all three kids.  They were so cute. 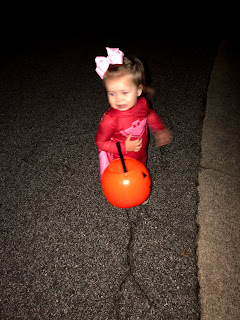 This girl marched all over the street and carried that bucket like it was her job.  It's so funny to me because last year was the first year Barrett really liked trick-or-treating.  The other years he just cried until we took him back home.  He just wasn't a fan.  But AveryAnn loved it.  She walked up to the door, said trick-0r-treat and stuck that bucket out for everyone to load it up.  She was so cute! 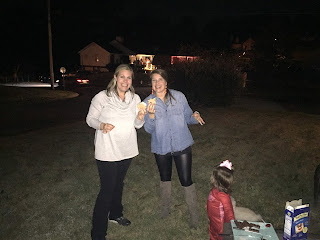 After we trick or treated we went back to the house and roasted marshmallows for smores.  I'm going to be honest.  I'd never done this before.  Every time I've had smores I've made them in the oven.  And that's how I will continue to make them.  It's not worth the effort it takes.  But we had fun! 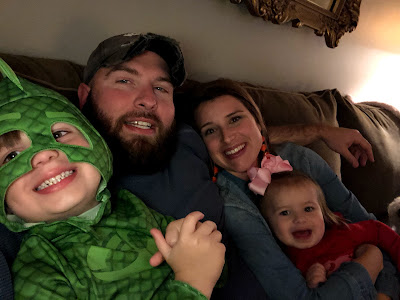 h
This Halloween was more low key than in years past.  I love the hustle and bustle of a house full of people but there was something so sweet about the simplicity of this years festivities.  It was just Jessica and Jackson and my parents that came.  I made a big pot of chili and some grilled cheese sandwiches.  And the kids ran up and down the streets until their little legs could barely make it up the stairs at each house.  It was the days I'd always imagined when I thought about my life with a family.  I know that all to soon these kids will be grown and it'll be Patrick and I hanging out at home while they go out with friends and I want to soak in every second of having small kids.  It's hard and exhausting but it's also magical.