We had a wonderful, laid back weekend.  Patrick had to work all weekend and that always stinks but Barrett and I tried to make the best of it. 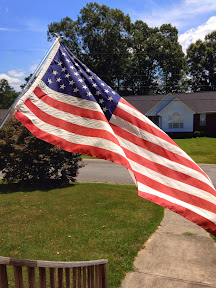 We went back and forth about what we were actually going to do for the 4th.  My parents were at the lake but I didn't really want to spend the night up there.  It's just so much work with Barrett now that he's walking and I didn't want to take him away from Patrick for the whole weekend.  (We decided we would go up for the day on Saturday since my sister and Clay were going to be up there then.)  Then we thought about going down to John and Hope's neighborhood since John had to work.  They have a little beach on one of the lakes where we could hang out but since I was going to go up to the lake on Saturday I wanted to hang out at home for most of the day Friday.  Barrett went down for a nap around 10:00 Friday morning I did some housework and made a list of things I needed to get when Barrett woke up.  While he was napping my friend Lauren texted me inviting us to her inlaws to hang out at their pool.  Her nephews were going to be there so Barrett would fit right in.  It was close enough to our house that it was no big deal if Barrett had a meltdown and we had to come right home.  So after I ran errands we put on our red, white and blue and headed over for the afternoon. 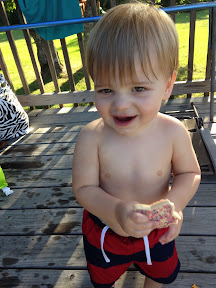 Barrett was so good.  He enjoyed the pool while I was holding him and then he floated on a raft for a while.  Everyone commented on how quiet and laid back he was.  When he wanted out he just played on the deck for a while.  Then he found the cookies I'd brought and he ate one (or four but who's counting).  They grilled a big spread and everything was wonderful.  Barrett made his self at home and played with some toys.  The boys shot fireworks and Barrett never even flinched. 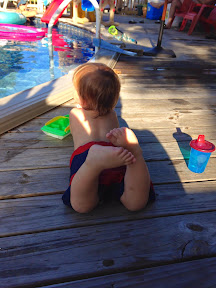 I love this picture of him just chilling watching everyone in the pool.  It was a fun, last minute adventure for us and I was thankful they let us crash the party.   Barrett stayed up way past his bedtime but he did great! 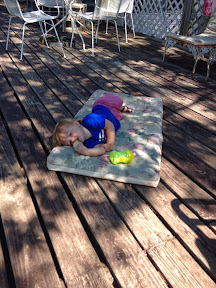 Saturday he was up bright and early.  We ate breakfast and instead of putting him down for a nap, I loaded up the car and we headed to the lake.  I thought he would sleep all the way up there.  I was wrong. He was awake the entire time.  So after a long night the night before and no nap I was worried how our day at the lake was going to go. 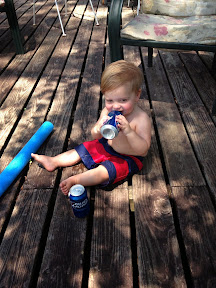 He wanted our cans. 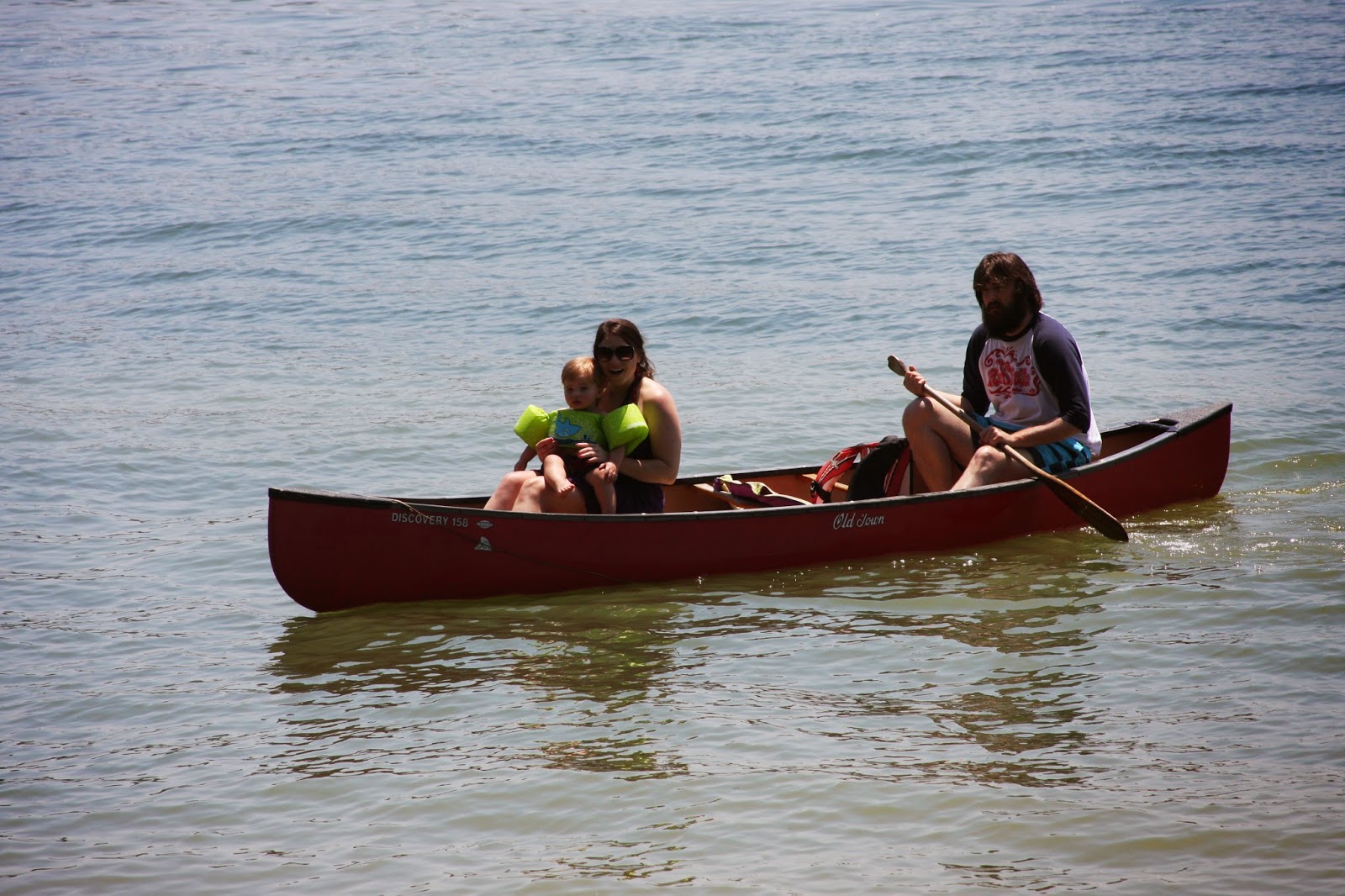 Aunt Elizabeth and Uncle Clay took him for a ride in the canoe.  He loved it. 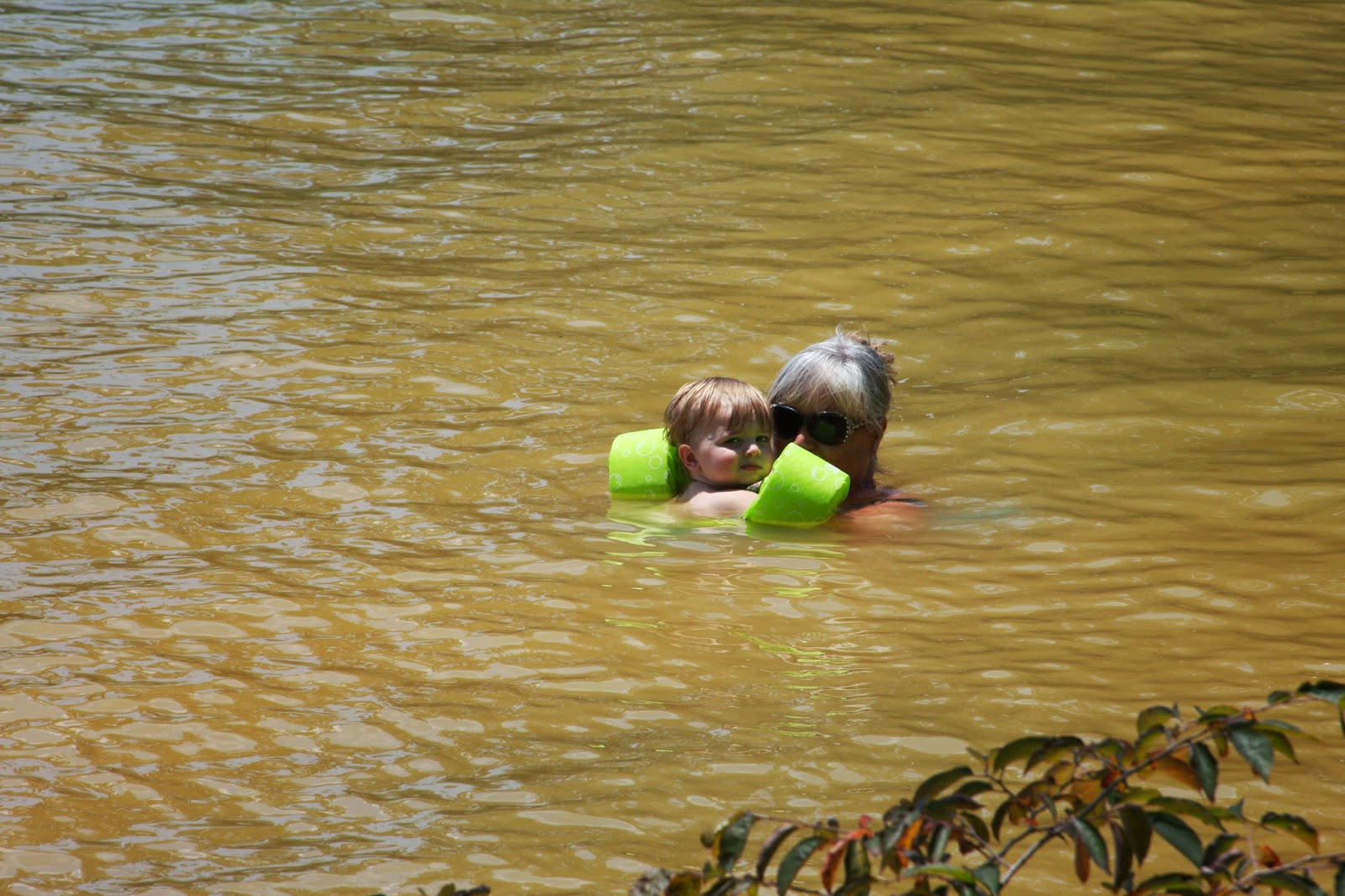 Nana took him swimming, which he also loved. 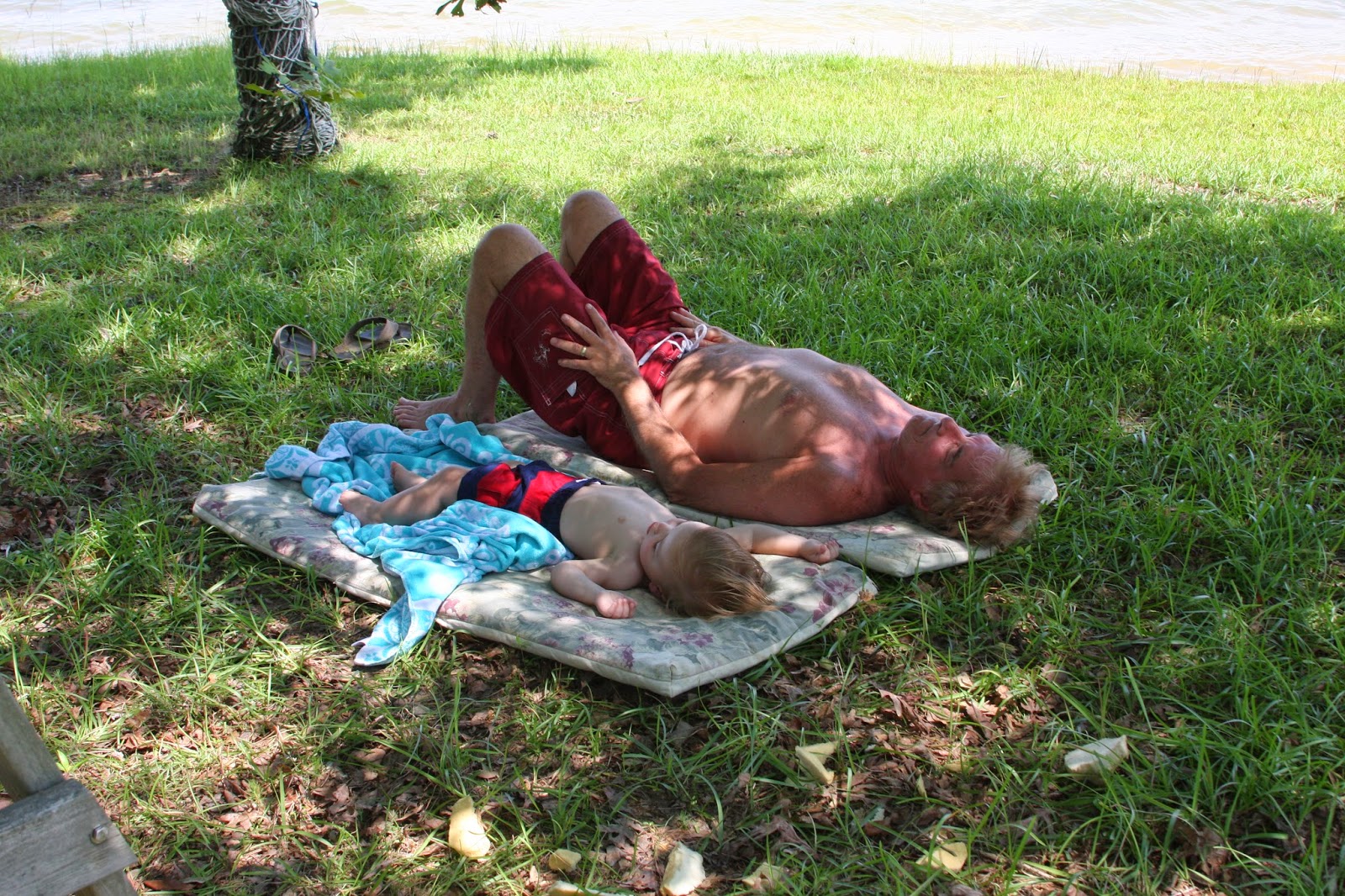 He got cranky in the water so his Granddaddy took him to the swing and got him to sleep.  He took a long nap.  So sweet. 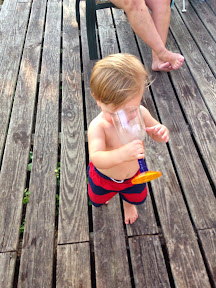 Dad made a pitcher of margaritas and Barrett wanted some.  I gave him my empty glass to play with.  He was so happy. 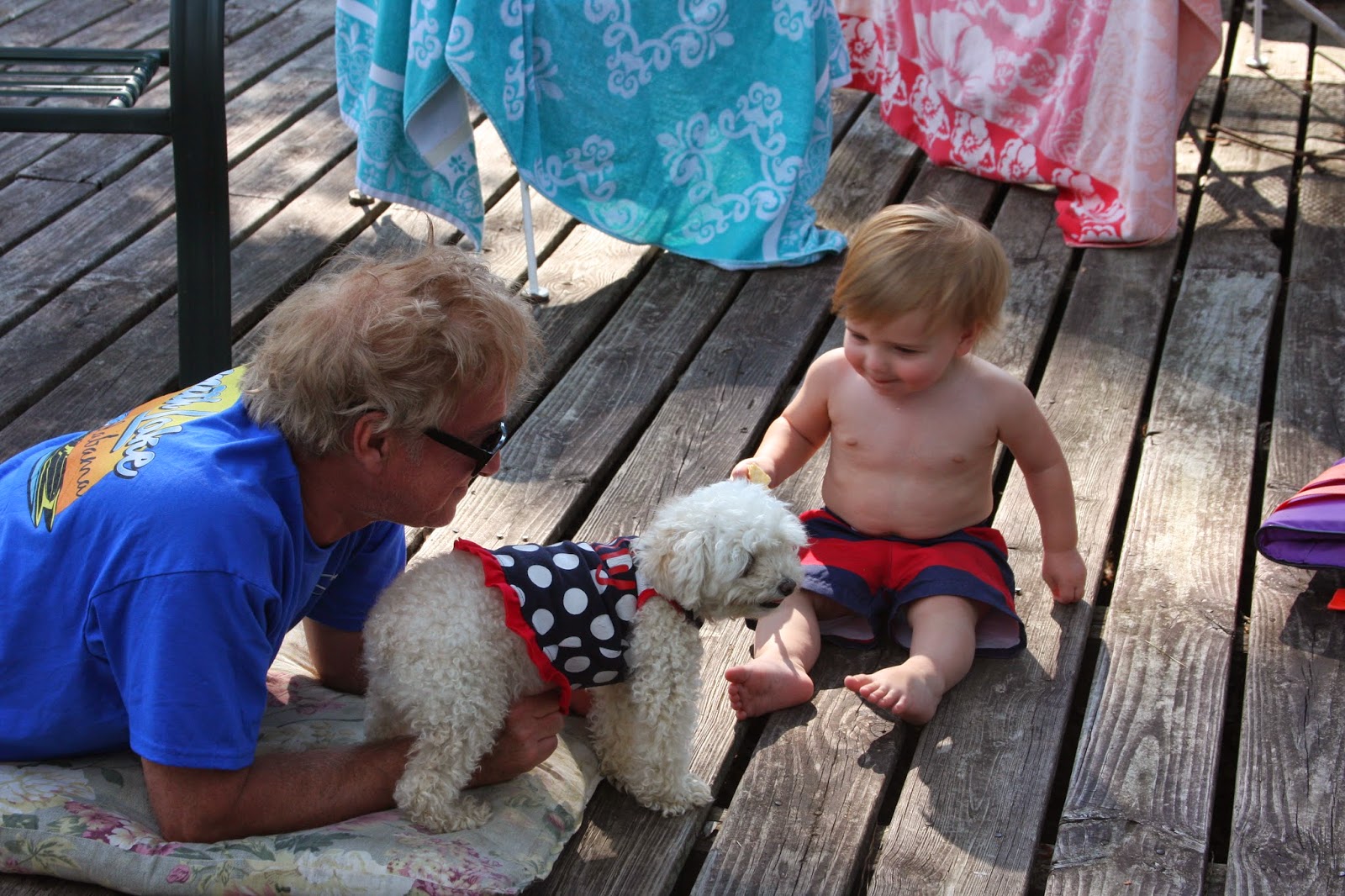 My dad with my babies.  (Ignore my dad's hair, he had a mishap with some hair color this week.) 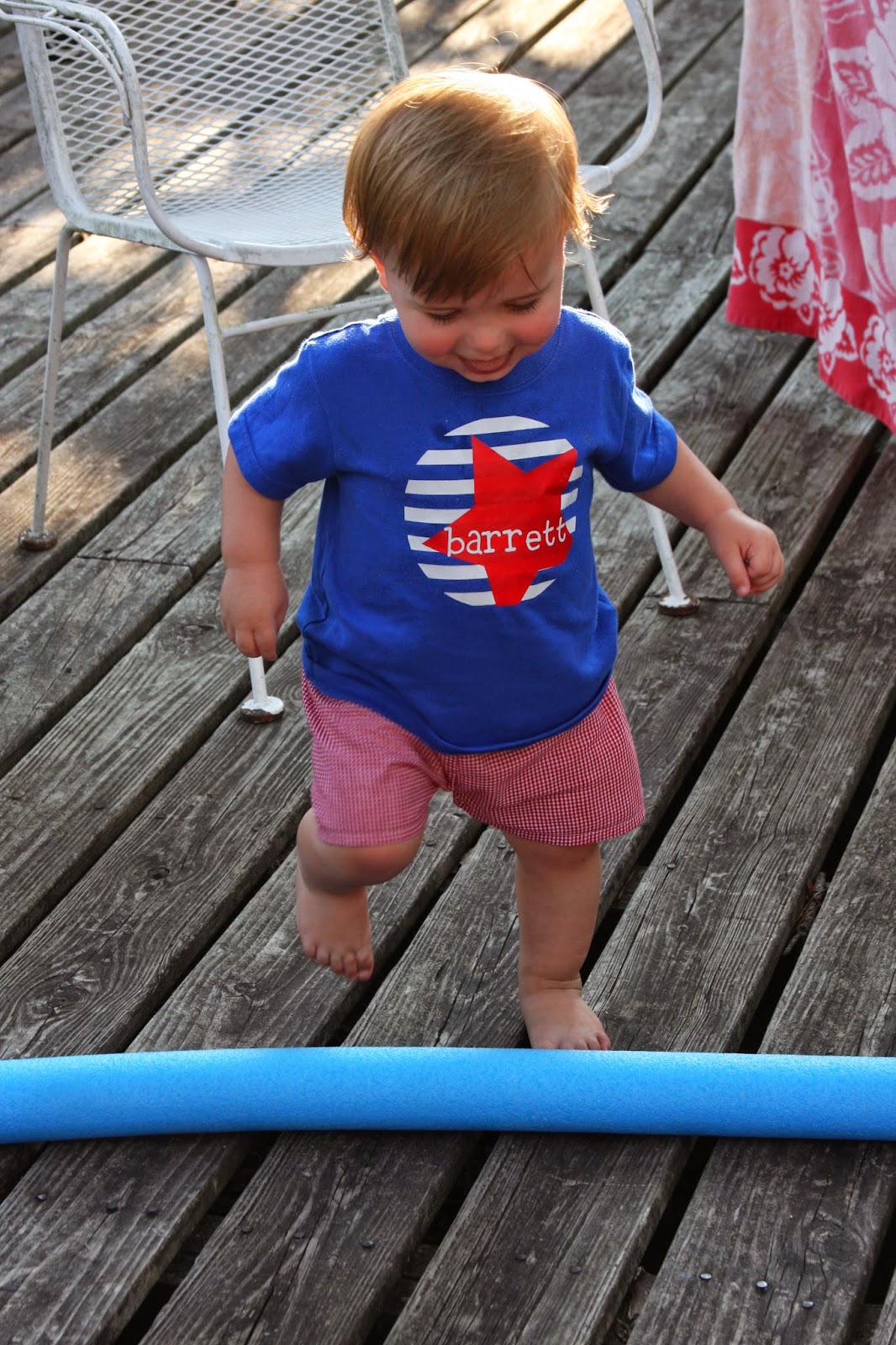 I loved this sweet shirt I made for Barrett. 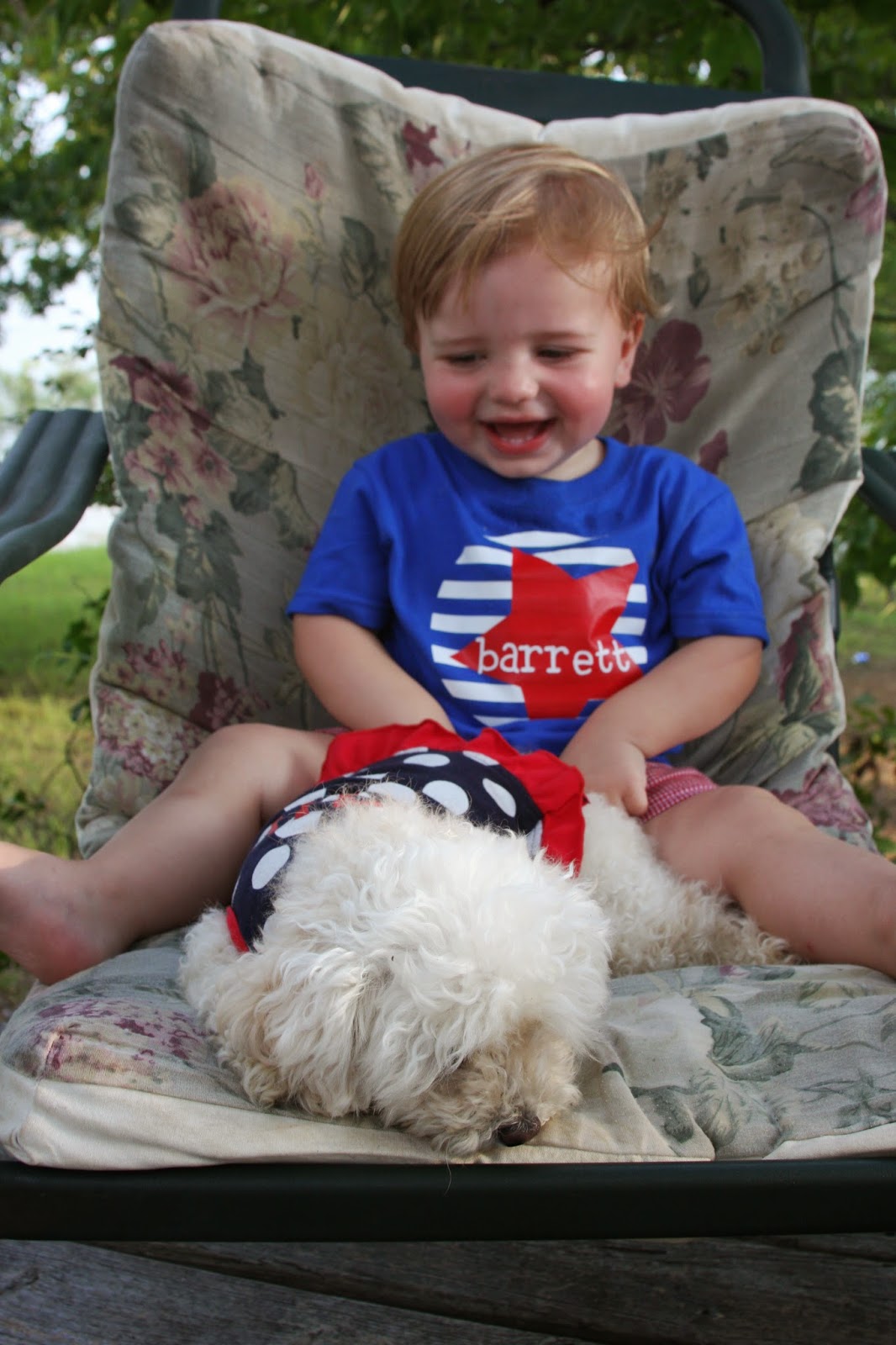 My sweet babies in their red, white and blue.  Ally's been avoiding Barrett lately but I was happy she cooperated for the picture.  He loves her so much! 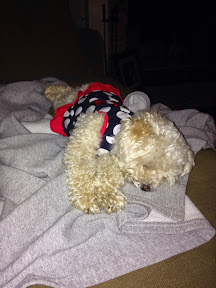 We came home and Barrett took a bath and went straight to bed.  Ally crashed too.  She was pooped. 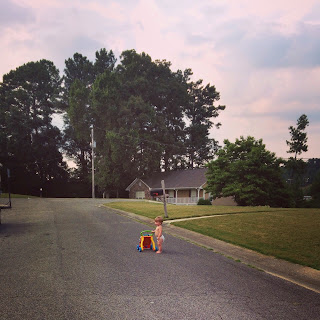 Today, we went to Mass and then grabbed some lunch on the way home.  We took long naps and then I cooked dinner.  After dinner we played outside.  I let Barrett push his toy up and down the street.  He was having so much fun.  He pitched a fit when it was time to come in and take a bath.
We had such a fun weekend.  I hated that Patrick had to work and it sucks that he was on second shift.  If he had been on day shift he could have at least enjoyed the afternoon with us each day.  But I'm so thankful for his job so I try not to complain to much.  We missed hanging out with our regular fourth of July crew but we still had a blast.
at 9:46 PM