Thoughts on the New Year

Now I realize that the first month of the new year is almost over but I thought I would take some time to review 2008 and make some goals for 2009.
Last year was a pretty big year.

These are just a few things that I would like to out my mind to. I am probably going to use this as my record keeper. 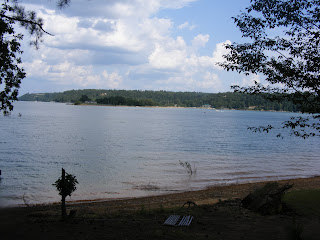 Proceeding with describing myself more I would like to introduce my favorite places. My all time favorite place to be is the cabin on the lake. My parents bought it when I was 6 months old and I have spent just about every summer since then up there. Well not the whole summer but the weekends. I would love to be able to move up there for a summer. We also go in the fall and winter it used to be our New Year vacation home every year until Ava was born on New Years Eve. Now we go to birthday parties instead of the lake. This is our view from the deck! We will sit out on the deck for hours without even setting foot in the water. It is one of the most beautiful places. Which is why it is one of my favorites!
at 9:38 AM No comments:

Not long after we got married I new I wanted a puppy. I actually had talked about it before we got married!! I new that I wanted a little poodle. My family had a teacup poodle growing up and he was the best dog we ever had. We all loved him so much. Patrick works nights so I wanted one that would sit a watch tv with me but also have some personality! That is exactly what we got. We already had two big dogs but Patrick wouldn't let me let them in the house. He has never had an inside dog so he didn't really know what to expect. I think he was pleasantly surprised. He loves her more than he would ever admit. She goes everywhere that we are allowed to take her. She goes to work with me everyday. She goes to our parents houses, she goes to our friends houses. She is like our child only we can leave her at home when we need to. She is just enough responsibility for us right now. We would like to wait 2 or 3 years before we have children so Ally is our baby for now! 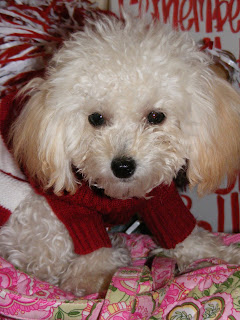 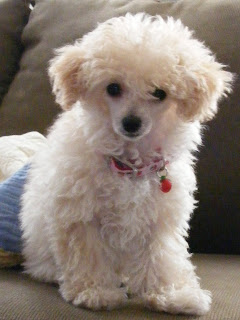 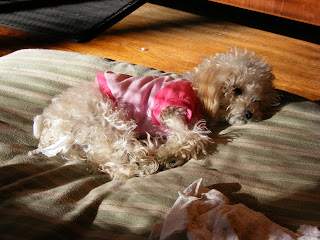 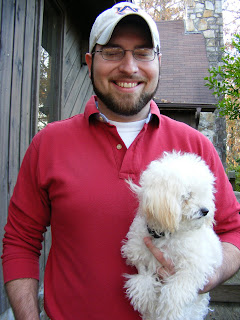 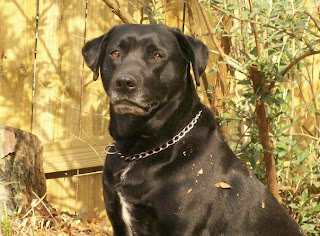 This is Gracie my 6 year old black lab. We've been through a lot together. I hit her with my car when she was only 5 months old she had to have very expensive surgery. She survived almost a whole year at Alabama with me. Then she moved back home to live with my mom and dad until I finished school. She is very hyper and will get our of any pin you put her in but she is so sweet and so good with kids. I have so many pictures of my neice Ava laying all over her. 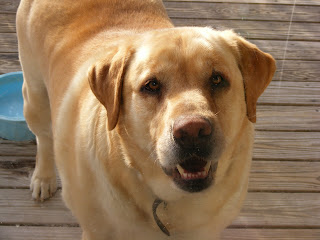 This is Sam. He is Patricks 105 pound yellow lab. He is the biggest baby. In this picture I actually am in the kitchen and he has is nose and mouth pressed up against the glass door. He is a great dog. He does exactly what you tell him when you tell him. He and Gracie have become best of friends.
These are all of out babies.
at 1:35 PM No comments:

It's All about Me!

Since I am new to the blogging world I wanted to introduce myself a bit.

I am Maggie Maxwell Horton. I married Patrick on March 28, 2008. We had a beautiful wedding and reception at the church I grew up in, St Elizabeth Ann Seton Catholic Church. 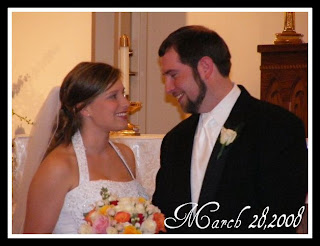 It was truly a magical day. I can't thank our parents enough for everything they did to mkae it happen! For our honeymoon we rented a little house in a retirement community in Rotunda West, Florida, it is about an hour south of Tampa. We had to drive about 10 minutes to the beach but it was worth it. Each day we went to a different beach, one day we drove to Tampa and went to Busch Gardens. I didn't know Patrick was afraid of roller coasters until then! This is just one of the many things I would learn about him this year! One day we drove clear across Florida to Palm Beach to rub elbows with the rich and famous! It was a beautiful place! We had a blast. 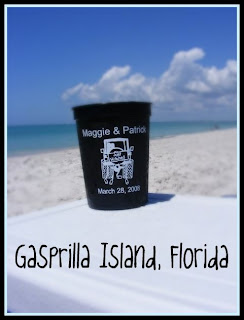 The cups were given out at the wedding as favors and were a huge hit! Patrick and I met through my older brother. Whose name is also Patrick! They are the same age and went to school together and became really good friends 5 or 6 years ago.
Now for my family. I come from a very large family. My mother has 4 brothers and 2 sisters. There are 12 grandchildren and 16 great grandchildren. We are pretty close to most of them. I have 2 brothers and 1 sister. My older brother Patrick is married and has four beautiful children. 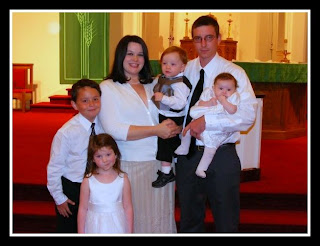 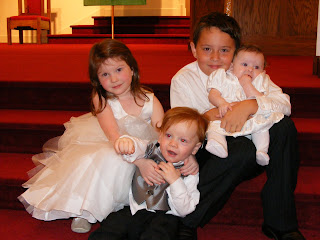 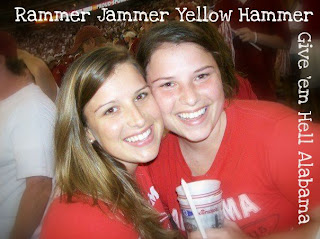 My younger sister is a junior at The University of Alabama. People have thought we were twins for years. I don't really think we look that much alike but others would disagree! She is my best friend. She is the over achiever and wants to please everyone no matter what it takes. We shared a room most of our lives and we got our own rooms when I was 16 then while I was finishing my last semester at Alabama my dad made us share a room again. We thought it was going to be awful but it turned out to be one of the best semesters ever. We laughed a lot and caught up on the years since we'd last shared a room. This picture was taken after Alabama beat Arkansas in 2007 in a nail biter. 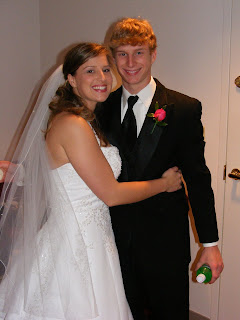 This is my baby brother John. He is a freshmen at The Univeristy of Alabama. They share a house with my cousin. He is very smart but rarely uses it for good. He has a sweet little girlfriend. They've been dating for a while now. She just transfered to Alabama this semester. He is the typical baby. Just like in any family he gets away with everything. 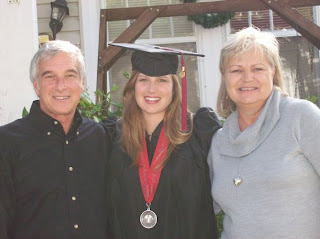 These are my awesome parents. They truly are two of my best friends. They are there when I need them. They will always tell me like it is. They are supportive and I couldn't ask for anything more. I can be myself and don't have to hide a thing with them. That's not to say that we don't have our disagreements but we can usually respect each others opinion and just agree to disagree.

I guess this is all for now. I'm not through introducing myself but this will do for now!
at 2:36 PM No comments:

Labels: About me, Family, Patrick

This is my first post. There has been a lot on my mind this week and I thought this might be a good outlet.

One of my husband's good friends lost his wife Monday morning. She was 30 years old and the mother of a 11 year old son and 10 year old daughter. The crazy thing is no one really knows what happened. She had a hysterectomy about 3 months ago and had been in pain from that and she had also been sick with pneumonia like symptoms. Her husband tried to get her to go to the doctor Monday morning before he went to work, she said she would go on Tuesday because she wanted to spend the day with the kids since they were out of school. Well around 9:00 am the son called the dad to tell him he couldn't wake his mother. It was all over.

The poor son said he'll never forget the way his mother looked that morning when he rolled her over. My husband and I went to visit the family and all the husband could say to us was to take care of each other and to love each other every single day because you never know if it's your last.

This all has got me thinking and I really don't know what I would do if something happened to my husband. I don't know how I would go on. We don't have kids but I can't imagine having to help them deal with the loss of a parent especially since they were the ones who found her. I also can't imagine losing my mother and I'm 23. It is such an awful situation.
at 9:16 AM No comments: