Well we made the usual Memorial day lake trip. My family goes to the lake to be outside at the lake. We do not air conditioning or cable. This is rarely a problem. This weekend it rained the entire time we were there! Ava got to swim for about 30 minutes Sunday afternoon. I did get a few pictures from the weekend! 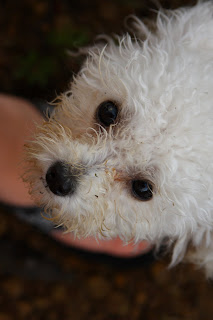 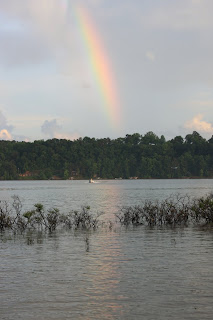 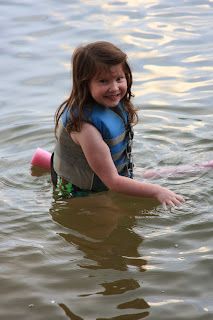 Okay now for TV this week! I have several shows I watch religiously! (My husband works nights I've got nothing better to do!) In order of how they appear in my weekly line-up!

A few others I watch when I can include

For my faves this week is Season Finale week so I won't have anything to watch come next week!

I'll start with Grey's Anatomy since the season finale was last week! I am very disappointed with this show lately but I can't seem to let it go! I am pretty sure that Izzie and George are dead which will make for an interesting season next fall but I'm not sure if I'll like it!

Next is Survivor: Tocantins! Now I watched to very first season of surivivor and have not watched it since until this season! I was hooked! I was so excited that JT won. He seemed to be the most honest and level headed of the bunch not to mention he is from Alabama! So I was happy with that finale!

This is my first season to watch Desperate Housewives so I am still getting into it!

One Tree Hill should have ended the series with the finale last night because everyone ended up together and doing everything that they love! Not sure what next season will hold because there were no cliff hangers!

Dancing with the Stars! I haven't watched this show in the past but I started watching it this season because I love Melissa! I watched her on Dallas Cowboys Cheerleaders Making the Team and on the Bachelor! However I think that Gilles will win! He is a very impressive dancer and I think that Cherly might be the best coreagrapher and teacher! We find out who take home the mirror ball trophy tonight!

American Idol! From the start of the season I have liked Kris Allen! I really hope he wins but I am doubtful! Adam Lambert doesn't have a recording voice to me! I don't like him but I also don't think he will sell a lot of records if he wins! Tonight is the performance we wont find out the results till tomorrow. I don't know if I can wait that long!

The Bachelorette started a new season last night! Jake the pilot is my early favorite! It's still to early to tell!
at 9:15 AM 2 comments:

Last Wednesday my sister and I hit the road for a little r & r! We went to Panama City Beach for a few days! The weather was beautiful, the water was clear and warm, and there were really no crowds! I guess we beat the end of school rush! These are just a few photos from the trip! We got lost on the way down there which was pretty funny to us since we have been to the same place every spring since we can remember! 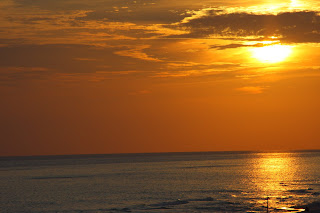 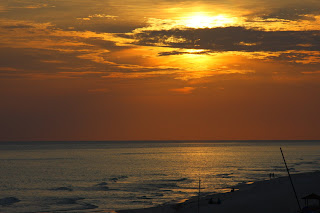 The sunset was the prettiest the day we got down there!
Now Patrick and I are puppy sitting for his brothers family while they are at the beach! We are keeping their toy poodle that is about 16 weeks old! It has been fun having a puppy around again! She and Ally have played a lot! I think they are going to miss each other when she goes Bella goes back home on Friday! That's all for now!
-Maggie

This time tomorrow I will be well on my way to Panama City Beach, FL with my little sister for 3 days of relaxation. I can not wait. I haven't been to the beach in about a year and I couldn't be more excited! My sister and I always have fun together! Yay!
at 1:21 PM No comments:

This week all I have thought about was summer time! The air smells of summer and the end of school. I miss that feeling of accomplishment on the last day of school when you walk through the doors knowing you've completed yet another year. I love to ride in the car with the windows down and the radio up! When I think of summer I also think of the lake. When I was younger we tried to spend every weekend at the family lake cabin. This summer hopefully Patrick and I will get to spend a few Sunday afternoons up there! (His schedule at work just changed and now he is off on Sunday and Monday instead of Tuesday and Wednesday) Our big dogs love it up there and will spend every minute in the lake. Sam will chase anything you throw into the water!

This time next week I will be kicking off the summer with my sister at the beach. We are taking a sisters trip for a few days just to get away. I can't wait. I hate going with out Patrick but we have so many weddings and things this year that he has to ask off for that he can't use his off days for this trip! This is my sisters last summer as she is going into her senior year at Alabama! She is trying to get an internship. So hopefully that will work out for her.

I'm so excited for this summer because I will be taking two photography classes at Samford one night a week for about 10 weeks. One class is 5 weeks and the other will start the day after the first one ends. I am so happy to finally be doing this. I've been talking about it for months and I am actually going to get to do it! I love taking pictures and to get to learn more about how to do it and how to do it well thrills me to death! I'll will be posting about what I am learning.

My favorite summer memories are 1) Cheerleading camp! I hated it at the time but love the awesome memories I've taken away from it. 2)Everything about the lake but especially sitting on the deck eating grilled hamburgers enjoying the afternoon air. 3)Loading up the buick and heading to Panama City Beach and finally 4) My birthday!
at 10:36 AM No comments:

Okay so I know that some people might think this is a little but weird (and it is) but Saturday was Ally's first birthday so I decided to throw a party for her and a few of her friends came to celebrate! I really just thought the dogs would play and the owners would chat and that would be it! Well I had made some doggie cupcakes and I put Ally on the table and she dug in to them just like a child would have! It was the funniest thing I've seen in a while! Then it was time to open presents. So that is just what she did. She stuck her head in the bag and started draging the gifts out! It was like she knew exactly what she was supposed to do! I was so thrilled! I htink everyone had a great time.
Opening her presents from Sophie, Isabella, and Molly! Enjoying all the doggie cupcakes! 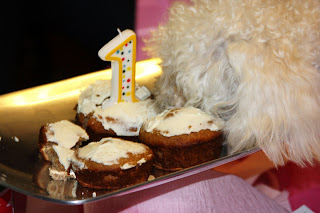 Reading her card from Nana and Grandaddy! 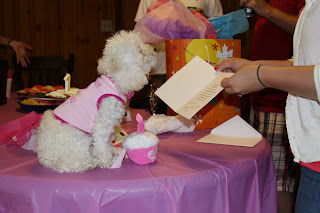