AveryAnn, you are six months old today.  It literally feels like last month I was sitting in that hospital room holding a (not so tiny) newborn, yet here we are half a year later.  You're developing quite the personality and love to laugh and giggle. 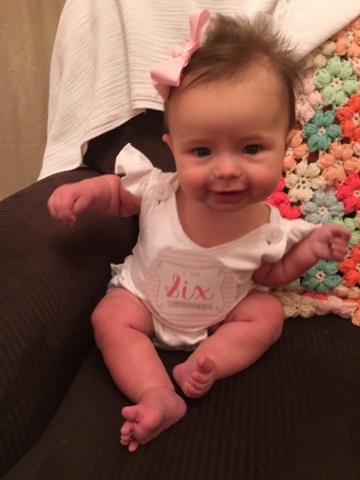 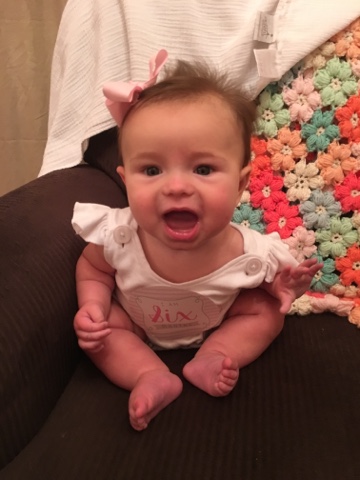 These pictures are hilarious to me. 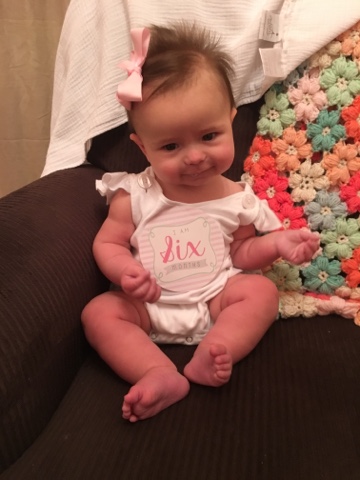 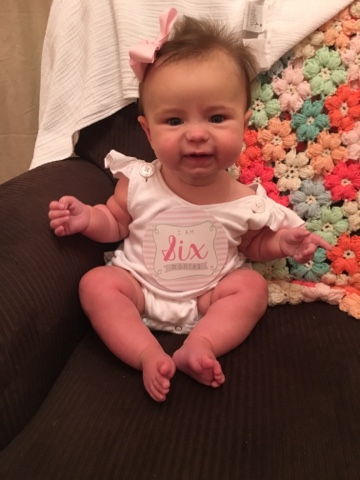 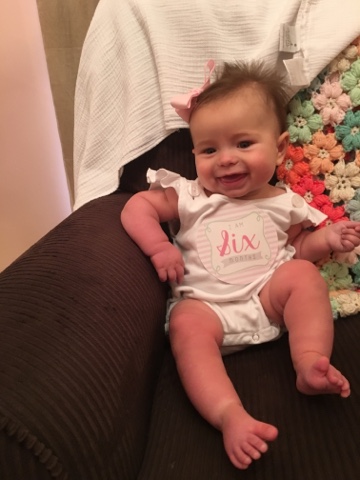 We love you so much!  You are the sweetest, snuggliest, happiest baby.  You love to be held and snuggle but you are also content to play on the floor.  You are a joy to be around.  We all take turns making you laugh.  Happy half birthday!  I hope time slows down a bit for these next six months.

Tuesday, Barrett started 3K at a new school.  He was excited and a little nervous.  I knew he would be ok once he got there and saw his friends but all the way there he kept saying "don't drop me off Mommy."  It broke my heart.  Also this is the first time he's going all day. 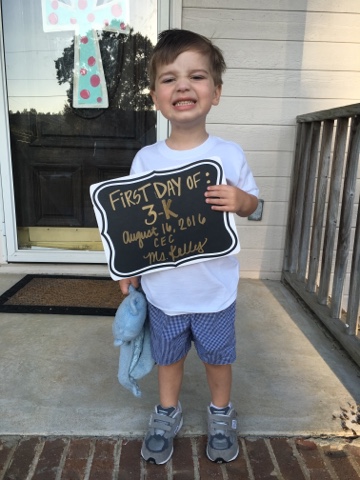 All smiles before we left the house. 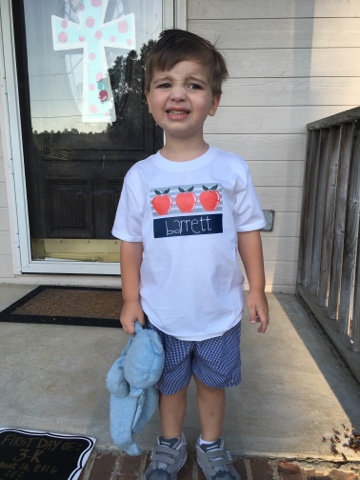 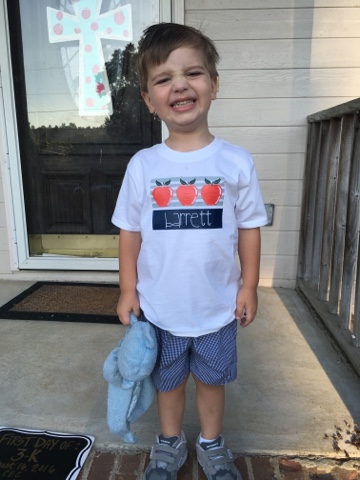 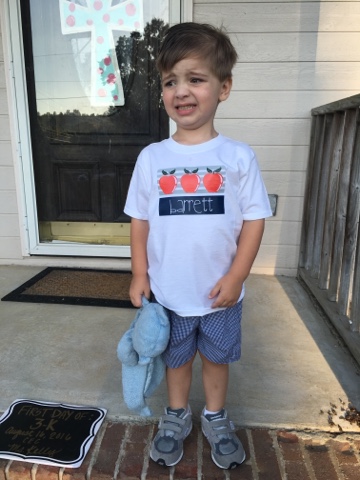 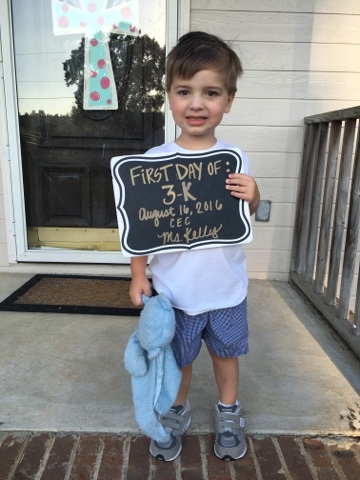 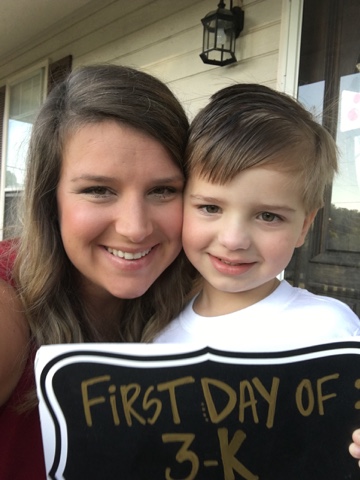 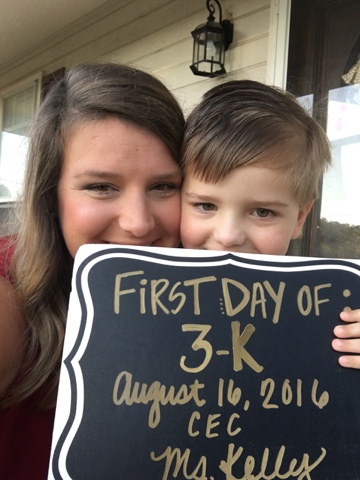 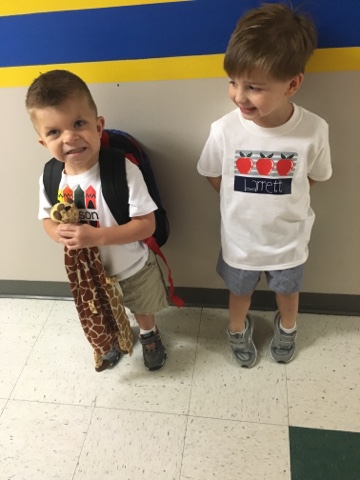 Luckily, We saw Cruz just as we walked in and then Jackson so he had his buddies.  He walked right in his classroom and I took off so that he would hopefully be ok.
I should have finished this post Tuesday because it has been down hill from there...
When I picked him up they said he had a hard time falling asleep for naptime but he did eventually fall asleep and did good.  Well, Cruz told his mommy that Barrett cried and cried at naptime.  I had forgotten to tell them that his bear was in his backpack and he was upset because he didn't have it.  He seemed like he enjoyed his day.  Wednesday morning he tells me he doesn't want to go to school.  All the way there he tells be not to drop him off.  We see Jessica and Jackson in the parking lot and walk in together and he seems fine until we get to his classroom and they have to peel him off of me.
I pick him up and they said he did better at naptime and had a good day.  He is so happy when I pick him up but he's already telling me he doesn't want to go back.  Last night he would not go to sleep because he was so worried about going to school.  He finally went to sleep around 11:00 and he got up and got dressed but cried the whole morning.  We run into Jessica and Jackson in the parking lot again and walk in together.  Jackson gets right in line with his class and Barrett loses it.  Since Jackson is fine and gets right in line, Jessica takes the baby back to my car while I drag Barrett to his classroom.  The teacher once again peels him off of me as he's screaming.  I quickly walked away.  Today, I too am bawling.  It was awful.  I could hear him screaming down the hall "don't leave me!"  Several of the sweet teachers and friends stopped to hug me and tell me he's just fine.  It's all normal and he does great once he calms down.  But it still kills me to leave him so upset.  They said it usually takes kids 2 or 3 weeks before its better.  That's 6 more drop offs.  I'm not looking forward to it but I'm trying to keep my anxieties in check so he doesn't feed off me.  I want to encourage him to go out and not be afraid.   I want him to love school and be okay when I leave him where I know he's safe and he's going to have fun.  It's preschool, not prison.
at 1:50 PM No comments:

Last Day of Mother's Day Out

Yesterday was Barrett's last day of Mother's Day Out and I was more sad than I was the very first time I dropped him off.  We love all the sweet teachers there so much!  Barrett has made some sweet friends and I couldn't be more thankful for everything he learned.  He was 20 months old when he started and he didn't say anything.  He might have said "Hey" but that was it.  His vocabulary is amazing now.  He talks all the time.  I've been so encouraged by his teachers.  They have always been so kind and helpful.  When we started potty training (post coming) they were so ready and willing to help us succeed.  I just can't say enough great things about them. 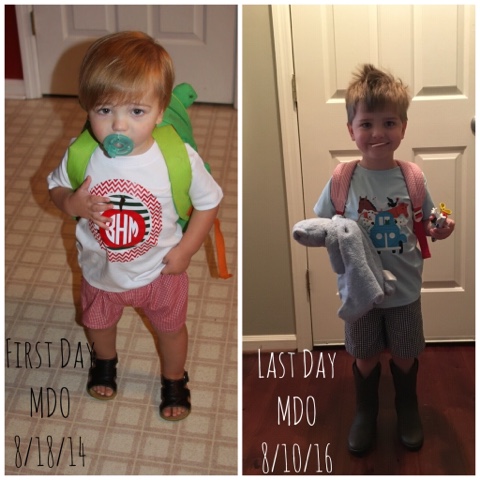 His first day just two short years ago.  I miss that sweet chubby face so much. 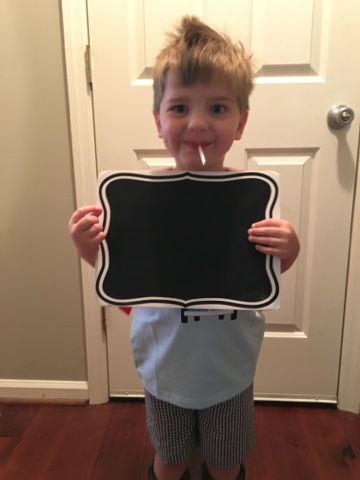 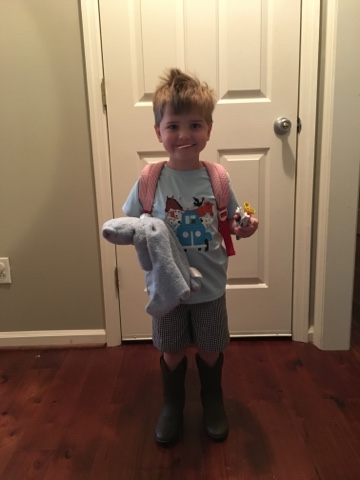 That bed head is something else.  Also he gets suckers for pooping in the potty.  We don't usually do candy for breakfast. 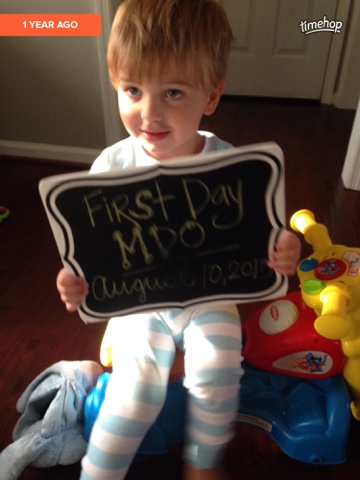 Last years first day, he was sick and missed but we still had to take his picture. 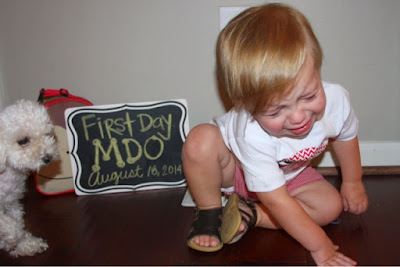 His first day. I should probably note that this was actually the second week because he was sick the first week.
He's headed to a new school next week for 3K.  He'll be going 3 full days each week.  I'm excited and sad all at the same time.  It's so true, "the days are long but the years are short."  I feel like I blinked and two years passed.