One of my favorite traditions that Patrick and I started our first Christmas was a picture of us in front of our tree Christmas morning.  Sleepy faces, pjs and all.  At the time I has no idea how much I would grow to love these pictures.  I think they'll only get better and better as the years pass. 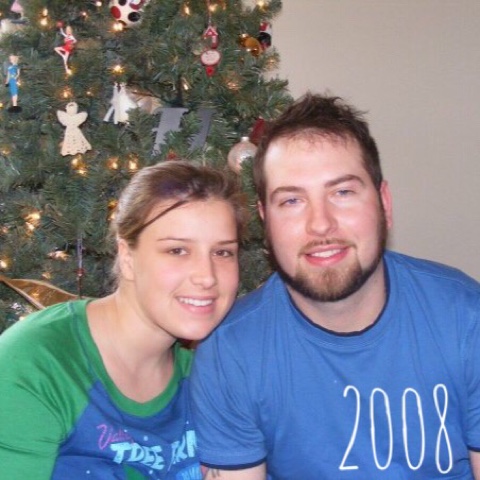 Our first Christmas married in our house.  You can notice our tree was mostly Barbie ornaments.  Poor Patrick. (Although I can't really say that has changed much.)  We had Ally that year, I can't believe she's not in the picture. 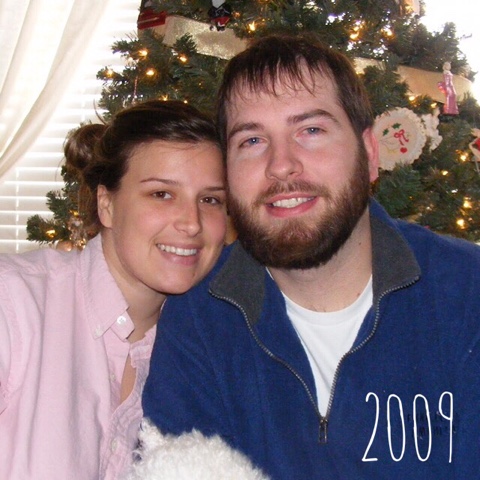 We looks so young. 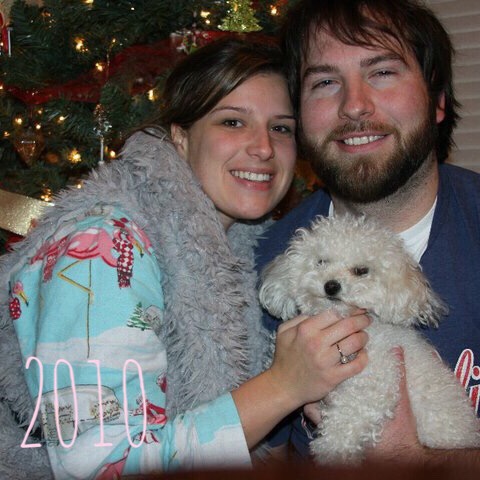 This is the year it snowed.  One of my favorite Christmases before Barrett. 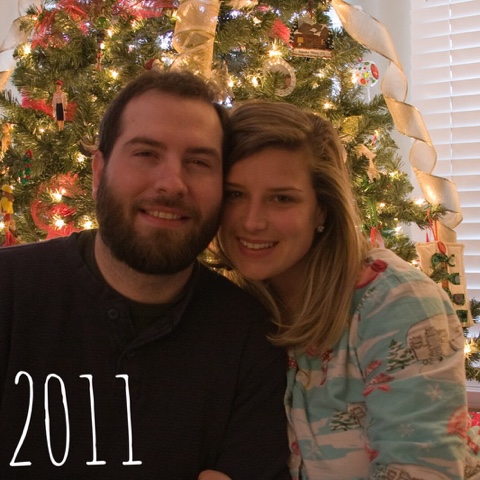 I love this picture.  Those two kids had no idea what the next year would hold for them.  The end of 2011 was exciting and hard all at the same time.  We hoped to start thinking about starting a family but never dreamed that would be the last Christmas just the two of us.  In some ways I feel like we look more mature here like we're finally ready to be adults. 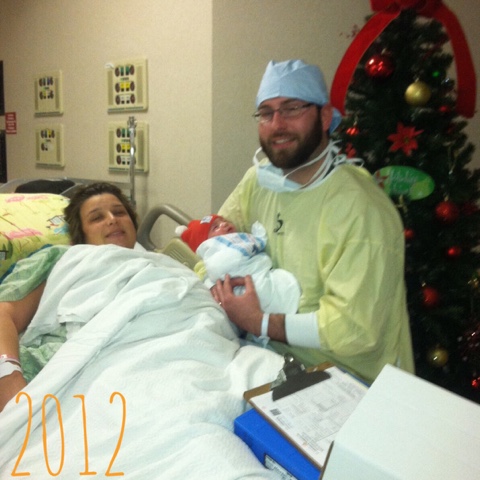 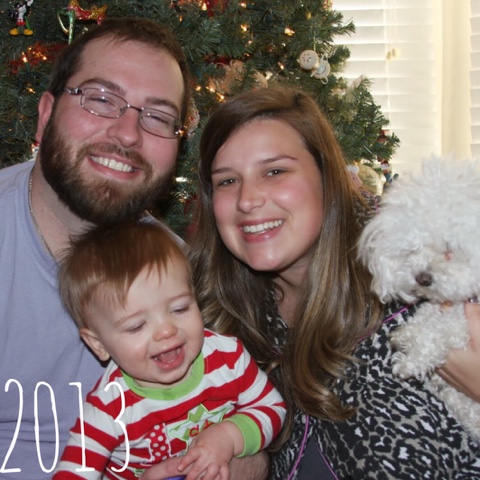 Our first Christmas morning at home as a family of 3 (4 counting Ally).  I love Patrick's smile in this one and I think Ally's expression sums up how she feels about the new addition. 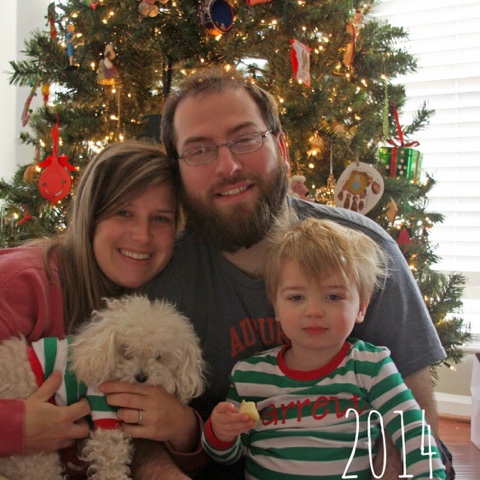 Celebrating our 2 year old and loving that handprint ornament hanging behind us.  I remember hoping we'd be a family of 4 by the next Christmas. 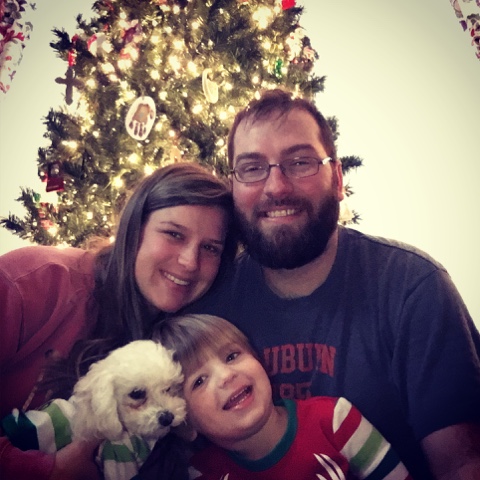 This year.  Not quite a family of 4 yet but it won't be too much longer.  I realized Patrick and I are wearing the same thing as last year.  Barrett looks so old it hurts me.  When I look at this picture I think about all the heartache we've endured this year and think about how we never lost faith.  I felt the joy of knowing that while this year wasn't my favorite it definitely made us appreciate life and where we are now.

I may never get my pictures off my real camera so I'm going to go ahead and write about our trip to the North Pole way back at the beginning of December.  We were so excited to go to ride the train to the North Pole and see Santa.  We had low expectations.  I'd heard mixed reviews but I wanted to try it.  We went with Jeremy, Jessica and Jackson.  The boys were so excited.  We got there early and the boys played with the train table in the gift shop.  Barrett cried when we had to leave there to line up for the train ride. 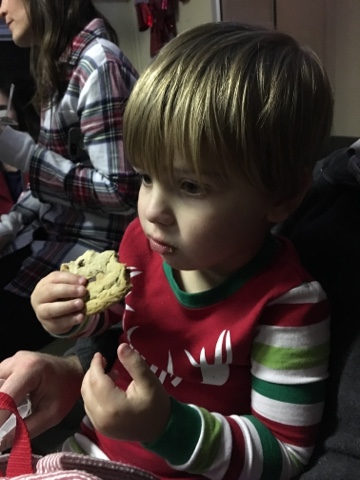 He was excited once we got on the train and started our trip to the North Pole. 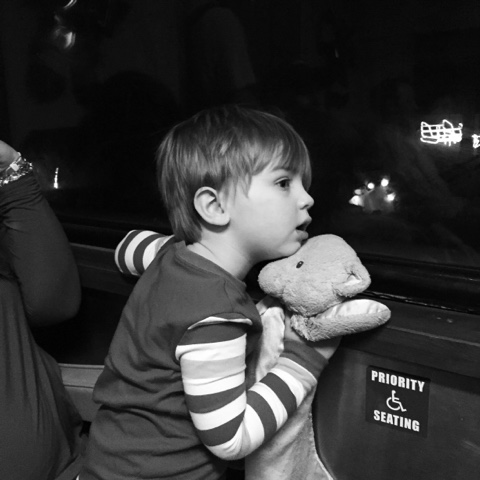 This was when he saw the North Pole and Santa.  It was the sweetest thing and made the whole night.  Jessica snapped this picture with her phone and I love it.  I love the look on his face and the fact that his bear is right there with him. 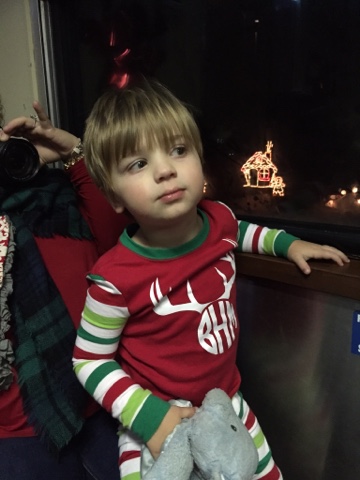 I was nervous how he would do with Santa.  In the past he hasn't been the biggest fan of the jolly guy but this time he seemed so excited.  Santa got on the train and Barrett actually talked to him.  I think it helped that he didn't have to sit with him.  Santa just stood behind his seat. 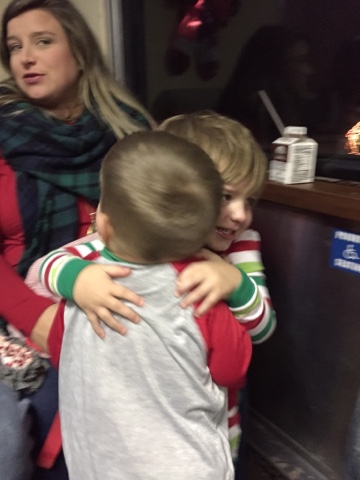 These boys are so sweet and the best of friends. 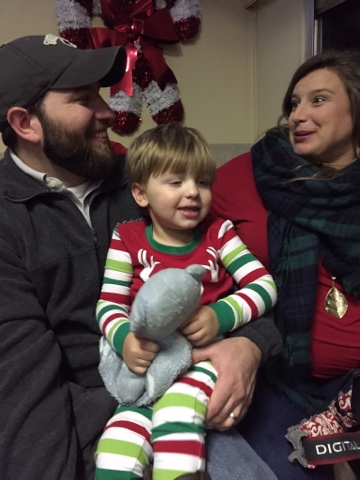 We have a better family picture on the real camera.  Maybe one day I'll show you.  But this one is hilarious.
We had a fun night but Patrick and I ultimately decided it wasn't something we would do every year.  We just didn't feel like it was worth the money.  It was fun and I'm glad we did it just not on our every year list.
Finally got the pictures loaded.  I love them so much! 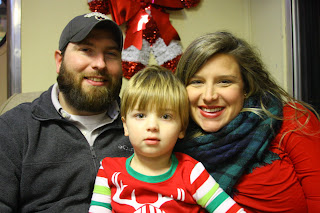 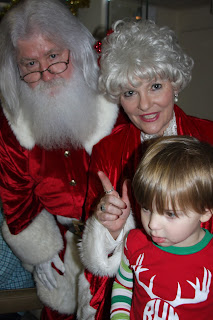 Barrett did pretty good talking to Santa.  He wasn't a huge fan any other time we saw him but I think the fact he didn't have to sit with him helped. 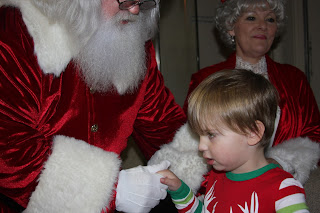 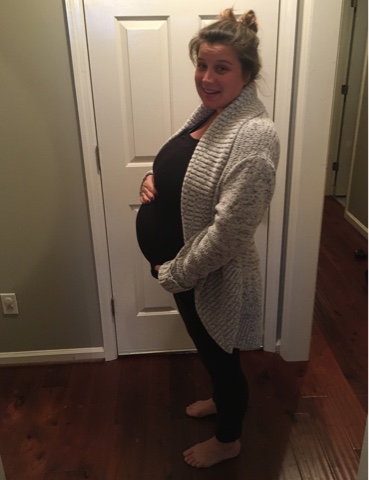 We've been sick for two days and this was the best is was getting this week.
How Far Along: 31 weeks
Size of baby: Head of lettuce (18in, 3.1lbs)
Maternity Clothes: Bottoms yes.  Tops no.  Mostly tunics and dresses as tunics.  I'm getting tired of wearing the same things over and over again.  But I don't want to buy anything else now.  I ready to wear my old clothes again!
Gender:  Girl.
Movement: This girl is feisty and way more active than Barrett was.  Which makes me very nervous because Barrett was such a chill, laid baby when he got here.  I'm hoping she's as easy as Barrett.
Cravings: None this week.  My sinuses have been stopped up and draining (if that is even possible) and I haven't been able to taste anything so I kind of missed all the yummy food.
Symptoms:  I'm huge. Other than that not too bad.  My feet had already started to swell really badly by this point and so far I haven't had that problem yet.  They'll swell a little if I'm on them all day but nothing like with him.
Best Moment this week:  Celebrating Christmas and Barrett's birthday.  Now I feel like I can focus on the nursery.  I got the crib sheet and changing pad cover I ordered.  So now I'm itching to get it all put together.  Plus we're running out of time.  If she comes as early as Barrett we only have 6 weeks left. {cue panic}.  I don't think she'll come that early but I'd like to be prepared.  I'm going to finally order her baby book this week too so I can get it caught up before she gets here.  I passed the 3 hour glucose test.
at 9:43 AM No comments: 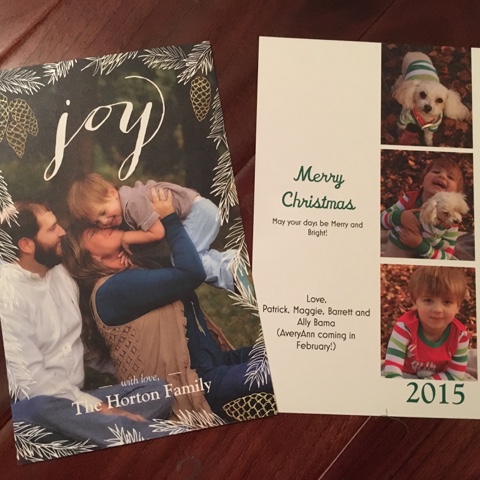 These are terrible pictures but I wanted to share our Christmas card from this year.  I loved how it turned out.  I'm not sure I ever got all of them out but I tried.  I hope everyone had a very Merry Christmas.  We sure did.  Maybe one day I'll get to blog about it. 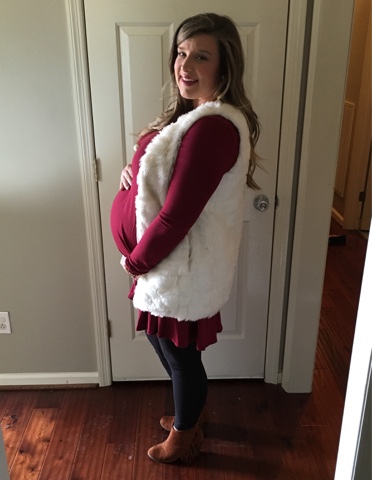 How Far Along: 30 weeks
Size of baby:  Head of lettuce (18in, 3.1lbs)
Maternity Clothes: All bottoms are now maternity when I'm out and about.  I can still wear sweat pants at home.  Most of my tops are not maternity just tunics and dresses I'm wearing as tunics.
Gender: Girl!
Movement: All the time. I felt her have hiccups for the first time this week.
Sleep:  The hustle and bustle of the season has me wishing I was getting more sleep at night.  What sleep I get is good so I can't complain.
What I miss:  Energy.  Taking a bath without needing help out of the tub.
Cravings: None really.
Symptoms: None really this week.  Just feeling large.  I've had a few BH contractions.
Best Moment this week:  I passed the three hour glucose test.  My dad and I went this morning and sat for 3 hours.  They took blood four times.  They called this afternoon and said my fasting number was a little elevated but overall everything looked good so I just need to watch my carbs and sweets.  We're so excited for Christmas this year.  Barrett is so excited and we're just trying to soak in his last Christmas as an only child. 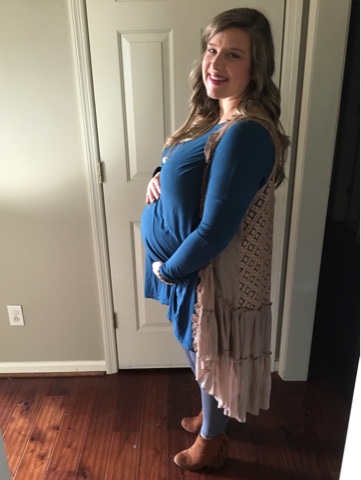 How Far Along: 29 weeks
Size of baby: Butternut squash  (16in, 2.5lbs
Maternity Clothes: Yes, always in public.  I'm wearing the same 5 or 6 outfits over and over again. It's going to be a long 10 weeks.
Gender: Girl!
Movement: All the time. It's the most amazing feeling!
Sleep: I've slept great this week.  Just need more of it.  I need to go to bed earlier but there just aren't enough hours in the day.
What I miss: My clothes and wine.
Cravings: None really.
Symptoms:  Sciatica. It started last Thursday.  It hasn't been as bad this week but still have days where it is really painful.  I've got a better idea of what triggers it now so I'm trying to avoid lifting stuff and carrying Barrett.
Best Moment this week:  We had our last 4 week appointment.  We start going every two weeks now.  Well this week I get to go back in one week since I failed my 1 hour glucose test and I've got to do the 3 hour one. Yay. Hopefully I'll pass that one.  When I go back and read these posts from when I was pregnant with Barrett I laugh at how much we had ready.  We are so behind this time.  I'm just trying to get through the holidays and then we'll tackle the nursery.  We really don't have a lot to do, it's only about a days work we've just got to do it.
at 12:58 PM No comments: 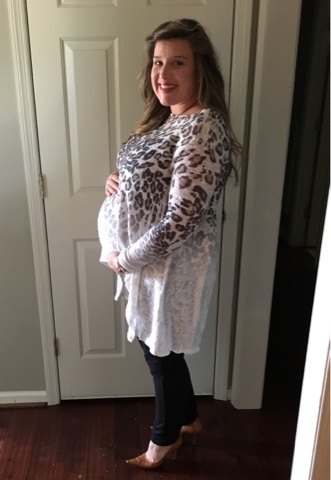 How Far Along: 28 Weeks, Third Trimester, the final leg,
Size Of Baby:   (16in, 2.5lbs)
Maternity Clothes: Most bottoms are maternity, most of my tops are piko tops and flowy tunics.
Gender:  Girl!
Movement:  Yes, she's pretty active at night.
Sleep:  I've Slept Great This Week. We finally moved Barrett to his big boy bed and it has gone pretty well so I've been sleeping much better.
What I miss:   Energy.  I miss being able to go, go, go like I could before.  With work and the holidays I'm exhausted by 4:30 everyday but still have a good 5 hours of life left to accomplish before my head hits the pillow.  I haven't really started Christmas shopping and in my head I'm thinking I can knock it out in a day or two but I'm beginning to realize that's probably not going to happen and I'm going to wish I had started sooner.
Cravings:  Just wine.  I know I sound like a terrible person but I just want wine.
Symptoms:   I've been having Braxton hicks contractions this week.  I've been busier at work and on my feet a lot so I'm sure that has something to do with it.  I've also had the sciatic pain a lot so I'm pretty much living on a heating pad.
Best Moment This Week:   Getting Barrett's room situated so we can start focusing on the nursery.  Making it to the third trimester.  I'm starting to see the light at the end of the tunnel which makes me very excited and also makes me realize how much we have left to do.  I know it doesn't matter if it all gets done but I'd like to have the bulk of it done before she gets here. 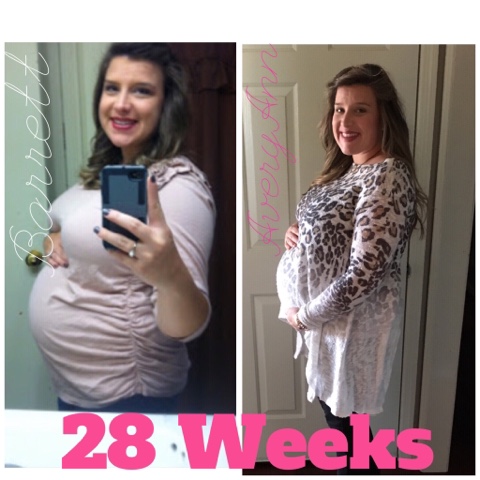 Comparison from 28 weeks with Barrett.  I've said all along I didn't think I was as big but I've really felt a growth spurt this week but looking at this picture it looks like AveryAnn is growing straight out.  Which would explain why I feel like my back hurts more this time. I think she's definitely lower and further out.