Ok, Road Trip might be a bit of an overstatement but while we were on our way to Tuscaloosa Friday afternoon, we heard that a road trip was in the top ten things to do this summer so Barrett and I started calling this our road trip.  I'd been planning this little over night trip for Brittany's graduation for a few weeks, when Barrett heard we were going to be going on a stadium tour he wanted to tag along.  I was hesitant at first because I didn't know how he would fair at the two hour graduation.  He assured me he wanted to go to the "long, boring graduation too!".  Who am I to deny his want to see others achieve higher education.  So, I decided to make it a mother/son trip and let him tag along.  And boy am I glad I did, it was the sweetest twenty-four hours with my boy.  We left Gardendale around 3:00 and I knew he was excited because he did just as my mom and I do when we're really excited about something...we talk non stop.  He talked and talked in the car.  He asked questions, he said whatever thoughts came to him mind.  We drove through so torrential down pours but he still talked.  I just had to laugh because he's just like me. 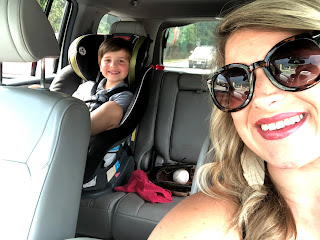 Heading out on our first ever Road Trip! ;) 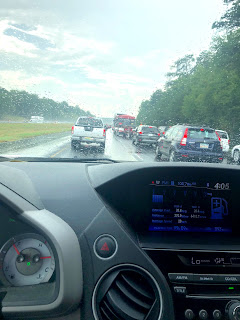 Confirmation that I can not ever go to Tuscaloosa without sitting in bumper to bumper traffic. 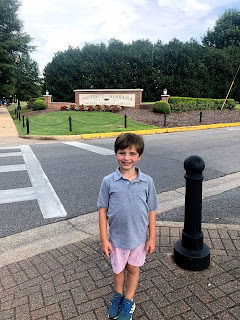 We arrived around 4:30 and headed straight to campus.  I wanted to run into a store to get Brittany a gift for graduation.  I knew exactly what I wanted to get I just had to find it.  So we got that taken care of and we had a little time to kill before we had to meet Chris for our tour so we walked down the to quad.  We've been to the quad a few times but it's always game day and super crowded. 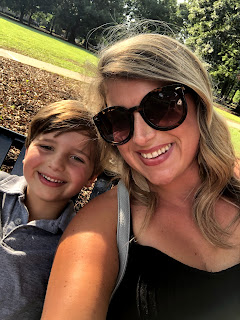 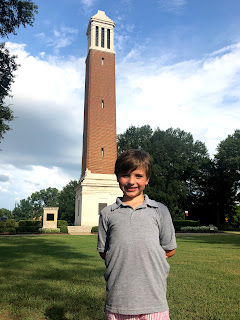 I wanted to get an updated picture of him in front of Denny Chimes. 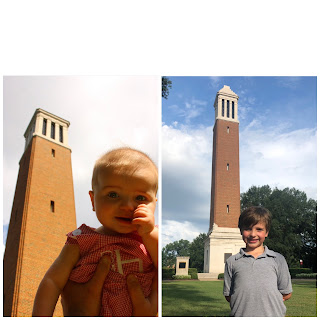 Then I dug up this picture and had to stop myself from crying myself to sleep. 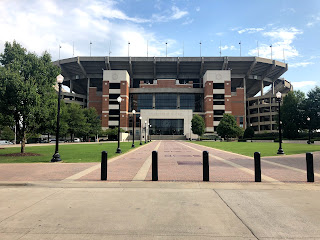 It was time to head back to the stadium for our tour.  My cousin Chris was leading our tour and I was so excited because we've never done one. 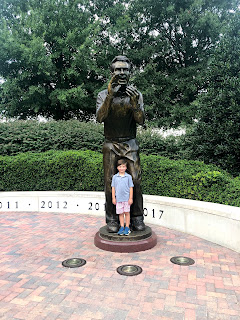 First, Barrett had to get his picture with Nick Saban.

Chris started the tour telling us all about the Walk of Champions, then we got to see the recruitment room.  The next stop was the room where coach does his after game press conferences.  Barrett was so excited to stand behind that podium. 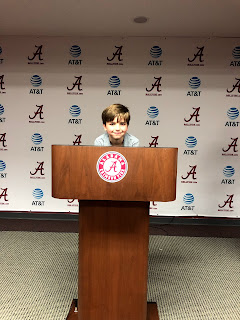 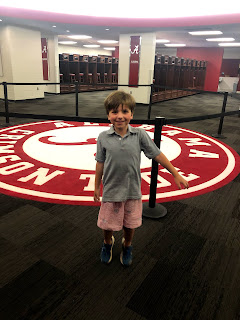 Next we headed down to the locker room.  We were all so excited pretty much the whole time. 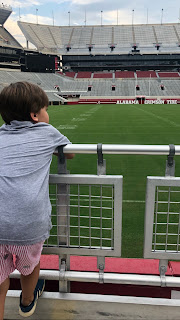 When we went out to see the field, the stadium looked so big.  It was so crazy to see it empty. 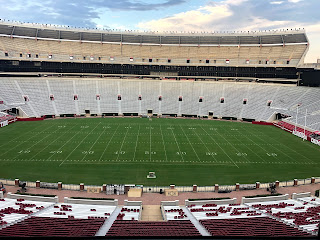 Next we headed to the press boxes.  It was excited to see where the SEC officials do the replays and where Eli Gold calls the games. Barrett was excited to see that there were nap stations for the media to nap if they needed ;)

After the tour, I had my heart set on Fingers of Fire at Buffalo Phil's.  And it did not disappoint.  Barrett was so grown up.  He ordered his own food and he asked the server for more sprite when he ran out.  It was like he turned into a little man over night.  I was so proud of him. 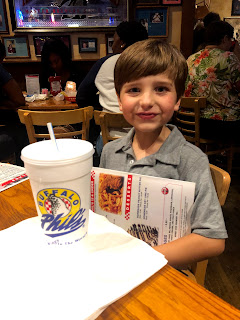 I think his love language is quality time and he was feeling very loved getting to spend so much time together.  I love getting to spend one on one time with him.  After dinner we headed back to Chris's house to settle in for the night. 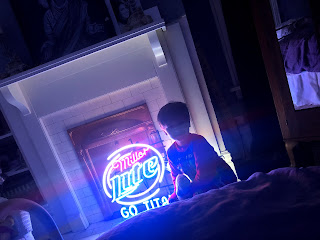 Barrett (and Chris) both were excited about the night light in our room.  Barrett kept telling me thank you for letting him come and how much fun he had.  I asked him what his favorite part of the day was and he said "the stadium tour for sure!".

We got up bright and early Saturday to get ready for graduation.  It started at 9:00 and time kind of got away from me.  I was visiting with Chris and eating breakfast and we left his house a little later than I was planning.  We walked into graduation as the National Anthem was playing. 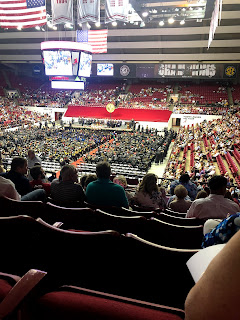 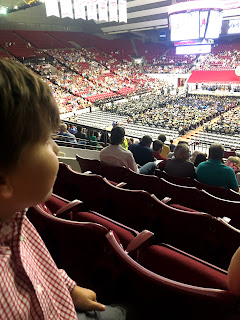 I love this picture of Barrett looking at all the graduates.  I've been to several college graduations over the years between my siblings and cousins and friends.  Its always emotional for me.  Since my own, I understand the commitment and the work that goes into it.  But for whatever reason being there with him today was almost more than I could handle.  I think the fact that it's been 15 years in the making for Brittany was a factor as well.  I'm so proud of her.  I love the part of the ceremony where they ask all the alumni to stand.  It's fun to see all the people that you're now in this family with.  I say it all the time, of course I'd be thrilled to death if Barrett went to Alabama.  But I'll be just as proud if he goes to a trade school or chooses to go to college somewhere else.  But being there with him today was so special. 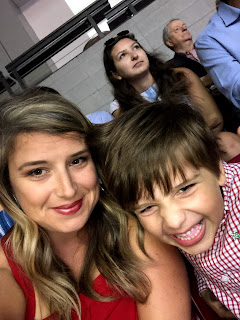 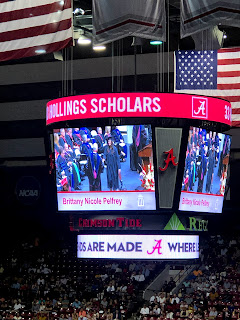 I did so good until they told them to move their tassels, and then I ugly cried.  It was so special to get to see my friend graduate.  She was one of the first people I hung out with when I moved into Tutwiler 16 years ago. (we knew each other but weren't really friends). 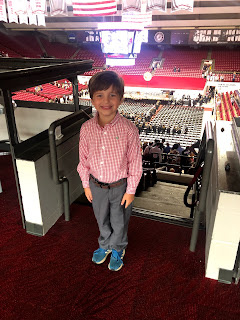 Barrett looked so handsome.  He put on his dress shoes this morning and he cried and said "Mama, I can't wear these, they are so small!".  He's outgrown so many things this summer, just adding this to the list.

After graduation we went to lunch.  Again, he was so mature and pretty well behaved.  It made me want to do more things like this with him. 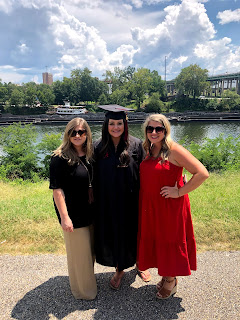 Gosh, I wish I could find the picture we took our first day in Tuscaloosa together.  I'm sure we haven't aged a bit. 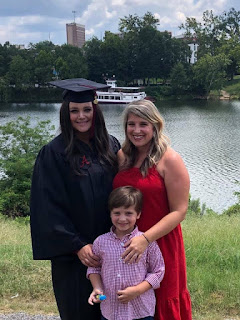 We told Brittany she has to come to Barrett's graduation since he came to hers. ;) 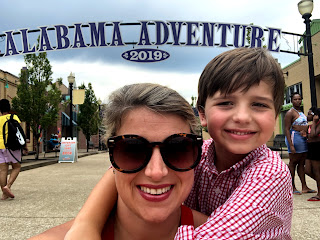 After lunch we hit the road,  we made a little pit stop at Alabama Adventure for a little more fun before we picked up AveryAnn.  (she enjoyed a solo trip to Nana and Granddaddy's house)  We rode one of the bigger slides we don't get to ride with AveryAnn is with us.  We floated the lazy river, we completed the maze and we rode the kiddie roller coaster.  We laughed and smiled and had the best day together. 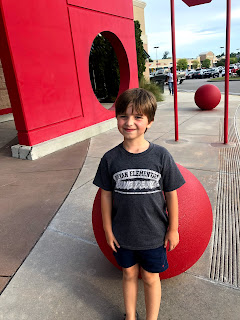 On the way home he asked if we could stop and get AveryAnn a prize.  (He wanted a prize too, lest you think he was completely selfless).  He chose a little prize for her and one for himself.  He was so excited to see her when we got to mom and dad's house.  We visited with my dad and then Barrett decided he wanted to spend the night by himself there tonight.  So AveryAnn and I packed up and left Barrett there for the night.
When I decided to let Barrett tag along on this trip I never imagined it would be this much fun or this sweet.  I'm so glad he got to come.  I'm hoping we can make our little road trip an annual Summer thing.  The time is passing so quickly and I know he'll be in college before I know it.  I just want to soak up every ounce of him at every age, because even with the challenges, it's such a sweet time.