This place has gone to the Dogs!

I got to have some fun at work this week. I shot some photos of this cute puppy Molly. She comes to work (along with my bosses other two dogs and my Ally) . He wanted to get some pictures of her because she is growing so fast! 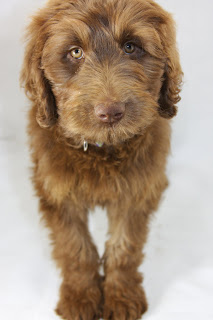 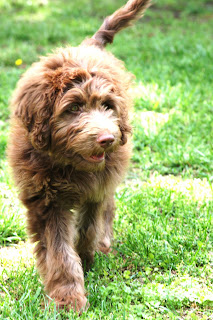 She is a Chocolate Goldendoodle! 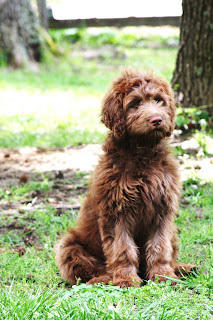 Wow! What a Weekend!

My sister-in-law has been out of town since Friday for a funeral. Which means it has taken my brother, mother, father, and I to make sure all four of their kids have been fed, bathed, and got where they needed to be all weekend. She is coming home tomorrow! Thank God! I don't know if we could do it another day!

Which I've been lucky because I've mostly just had the two older ones! Saturday we started at 9:30 at the soccer fields! I stayed for one game because I got a call from my mother (who had the two babies one is 2years and one is 10 months) that she needed my help to get both of them to the Magnolia Festival. Also Ally was going to be competing in the Pooch Parade so we also had her! So my mother, Porter, Harper, Ally and I loaded up the car and headed to the festival. My dad was already there working so we knew we'd have a little help once we got there. I was just worried we'd never get there! It was tough. I have a whole new respect for mothers and I question my ability to ever be a good one! Once we got there it did calm down and was easier.
Ally was voted the "Peoples Choice" and we couldn't be prouder even if my mom and aunt were the only two that voted who knows how many times!
Ava enjoying her post game snack! 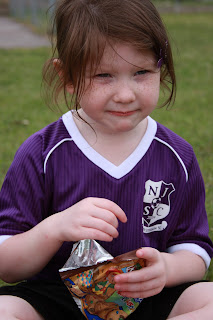 Ally Bama at the Magnolia Festival! 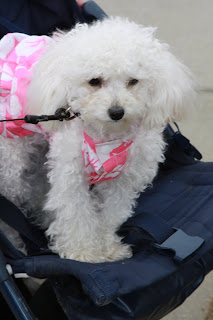 Harper Claire enjoying her ride at the Magnolia Festival! 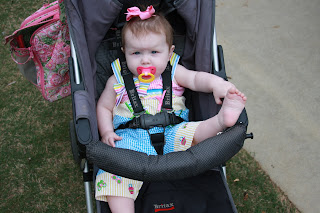 Porter on the Fire Truck! 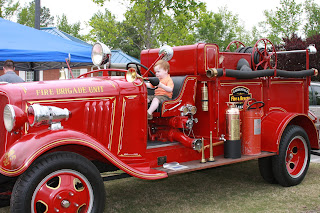 We went to church Saturday night so we could sleep late Sunday morning and go to Tuscaloosa because my younger brother and sister were competing in a "green" putt putt hole at Earth Fest. They built a putt putt hole out of recycled materials! It was so neat! They won "Most Innovative" and $250. Of course the have to split it 6 ways because there were so many on the team! We were so excited! Mom and I took Ava and Drew because we thought they'd enjoy playing the holes! On Our way home we were kinda between storms and saw the most incredible rainbow. It was the brightest one I've ever seen!
Team USA Ball Washing Bull Dancers 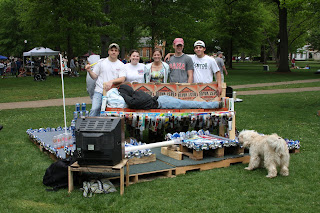 The theme was "Friday Nights in T-Town" 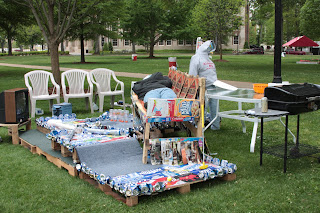 Then I kept Drew and Ava again so that I could take them to school this morning. I got them both bathed and the weather was bad and they didn't want to watch James Spann so they went to bed. They woke themselves up this morning (which is awesome because I used to have to be pulled out of bed by my hair!). We all got where we needed to be on time! I was proud of myself! Now I just have to pick them both up from school one at 11:30 the other at 3:00! I'm looking forward to my night alone! I deserve it!
at 9:32 AM No comments: 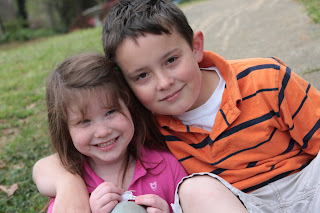 Here are a few photos from the weekend. 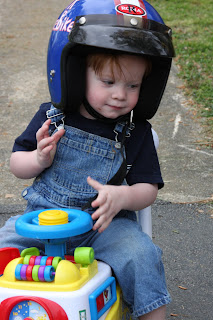 Porter riding down the sidewalk. 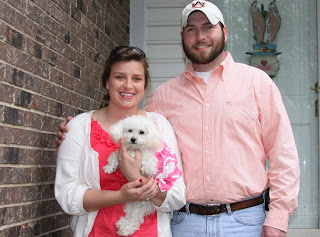 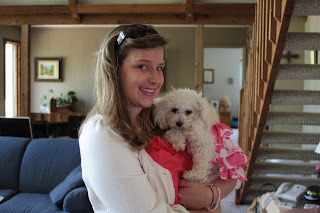 Ally in her Easter dress.

I wanted to wish everyone a belated Happy Easter! I love any excuse for a family get together! I am very close to my family! Although I know not everyone shares this joy! I also understand that the older we get the harder it is to get everyone together in the same place at the same time! In fact my family was never all together this weekend. Some didn't "feel well" while others had other obligations. It makes me sad that everyone didn't make more of an effort to spend a few hours together. I was also very upset that I didn't get to hunt not one Easter egg. Not one! We usually have a hunt at my Grandmothers for the "kids" but we didn't this year! I wanted to get a photo of my brother's family then of the four of us but never did because we were never all together. I really shouldn't worry because we actually see each other a lot (at least once a week, well not the college kids but the rest of us) I was just really upset. I was more upset because Patrick didn't get up and go to church with me but I understood that he had only had 6 hours of sleep in two days. Anyways enough rambling!
at 9:19 AM No comments:

Take Me Out to the Ballgame..

Friday night Patrick and I went to the ball park to watch his nephew play baseball. This is something I am not sure I can handle if I ever have a boy. I could not believe how intense these people are at 5 and 6 years old. Now I'm not going to lie the games were close and even I got a bit nervous. I just wanted to boys to win because all I'd heard was how bad they were and yes from parents. When did baseball quit being about having fun and learning? I really not an unreasonable person. I think we should keep score unlike some programs but why are we putting so much pressure on these kids to always win? It was almost more than I could take. I understand that some kids put the pressure on themselves but sometimes parents are pressurign their kids and don't even realize it. It makes me so nervous about having kids. It is so easy to see when you are on the outside. I'm afraid I won't know if I am pressuring them if I am in the situation. Where is the happy medium?
at 1:19 PM No comments: